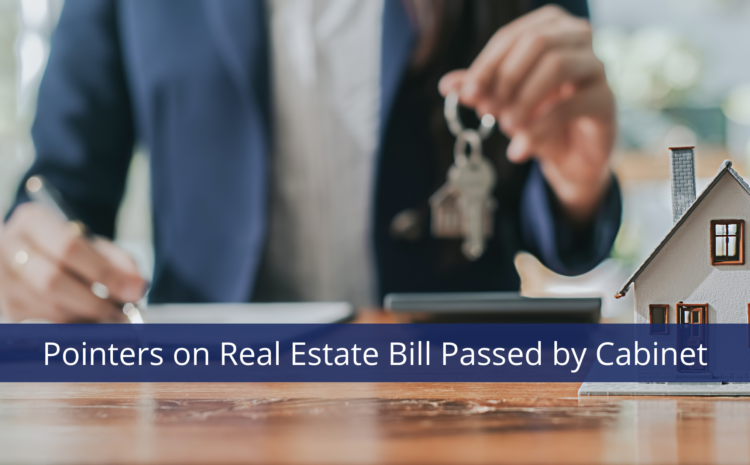 Finally, the much-awaited bill finds approval with the Cabinet. It is better late than never, will real estate customer woes being over for now. At least, the process has been set in motion.

The Union Cabinet approved the bill to set up a regulator for the real estate sector with provisions for a jail term for the developer for putting out misleading advertisements about projects.
Here are 10 things you need to know about the bill:
The Real Estate (Regulation and Development), Bill 2013, seeks to make it mandatory for developers to launch projects only after acquiring all the statutory clearances from relevant authorities.
It also has provisions under which all relevant clearances for real estate projects would have to be submitted to the regulator and also displayed on a website before starting the construction.
The proposed legislation has certain tough provisions to deter builders from putting out misleading advertisements related to the projects carrying photographs of the actual sites. Failure to do so for the first time would attract a penalty which may be up to 10 percent of the project cost and a repeat offense could land the developer in jail. Moreover, any false advertising implies that buyers will get a full refund of the money deposited with interest.
The bill also seeks to make it mandatory for a developer to maintain a separate bank account for every project to ensure that the money raised for a particular project is not diverted elsewhere. According to a CNBC-TV18 report, developers have to keep aside 70 percent of the buyers’ funds in a separate bank account to ensure timely completion of projects. The buyers are entitled to a full refund with interest in case of delay in projects.
The proposed legislation provides for a clear definition of the ‘carpet area’ and would prohibit private developers from selling houses or flats on the basis of ambiguous ‘super area’.
Under the proposed new law, builders will be able to sell property only after getting all necessary clearances. Registrations of projects with the regulatory authority are a must. This means developers cannot offer any pre-launch sales without regulatory approvals. Moreover, the authority must approve or reject projects within 15 days.
Developers will also be barred from collecting any money from buyers before completing all necessary permits to start construction on the project.
Builders cannot take more than 10 percent of the advance from buyers without a written agreement.
The bill also seeks the setting up of a real estate appellate tribunal for adjudicating disputes. The tribunal will be headed either by a sitting or a retired judge.
It also suggests setting up a national advisory council to be headed by housing minister Ajay Maken to suggest ways to advise the regulator on crucial matters.
Now, much of the transparency will come into the system that was long due.
We are following up and keeping track of developments. Stay connected for the updates.