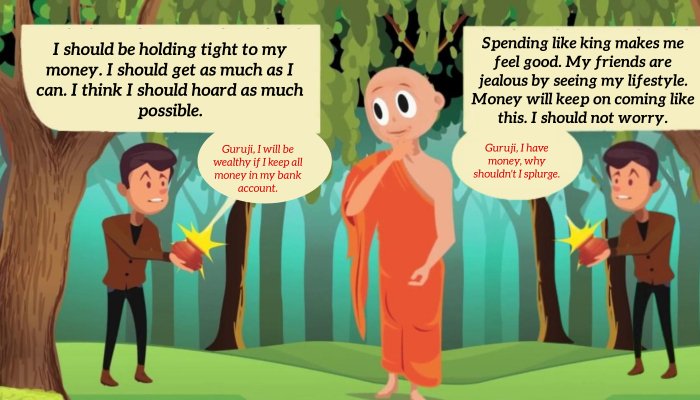 There was a man who had two sons and both of them were poles apart. One was spendthrift while the other was very stingy for the money. Father knew that Money is Power, but was helpless to make his sons understand this.

One day Father & 2 Sons were passing through a forest and met an enlightened monk. Seeing the father, the Monk understood to concern the father had; and asked them to be seated.

The monk closes both fists and asked the sons, “What if both of my hands look like this?” They both replied, “It looks like you have some disability”.

The monk then opens the fists and asked again, “What if both of my hands look like this?” They both replied again, “It still looks like you have some disability”.

Investing will enable your wealth to grow. Saving, and not investing will keep you poor; because Cash is NOT an asset, and thereby loses value in time. You need to spend it / invest in things that grow in value over time.

This is why it is very necessary to maintain a balance. Sometimes, keep your fists open, sometimes closed. In short words, it can be said that investing doesn’t mean saving all of your money or spending it all. It’s a balancing line between saving and spending.

One should save first and spend the left amount after saving. Most of the people who are short of wealth even after earning too much are because they save what is left after investing. The idea is to be rich and make the root strong but not to look rich!