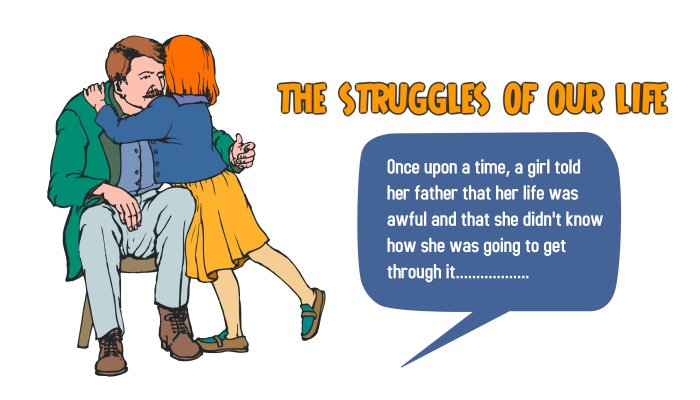 Once upon a time, a girl told her father that her life was awful and that she didn’t know how she was going to get through it. She was weary of always battling and trying. It appeared that as soon as one problem was overcome, another one arose. Her chef father escorted her to the kitchen. He put three pots of water over hot heat, one on top of the other.

He put potatoes in one pot, eggs in the second, and ground coffee beans in the third after the three pots had started to boil. Without saying anything to his daughter, he then let them sit and boil.

The daughter sighed and waited nervously, unsure of what daddy was up to. He switched off the stoves after twenty minutes.
He poured the potatoes into a bowl after removing them from the saucepan. He took the eggs out of the carton and placed them in a dish. He then poured the coffee into a cup and ladled it out.

He turned to face her and inquired. “What do you see, daughter?” She quickly answered, “Potatoes, eggs, and coffee.”
“Look closer and touch the potatoes,” he said. She did, and she commented on how soft they were. After that, he asked her to crack an egg. She examined the hard-boiled egg after removing the shell. Finally, he requested that she take a taste of the coffee. Her face lit up as she inhaled its heady scent.

“What does this imply, Father?” she inquired.

He went on to say that the potatoes, eggs, and coffee beans had all been exposed to the same danger—boiling water. Each person, on the other hand, reacted differently. The potato went in tough, hard, and unyielding, yet it softened and weakened in boiling water.
The egg was delicate, with a thin outer shell preserving the liquid interior until it was dropped into boiling water. The egg’s inside then turned firm. The ground coffee beans, on the other hand, were one-of-a-kind. They altered the water after being exposed to the hot water and developed something new. He asked his daughter, “Which one are you?”

MORAL OF THE STORY-

When rough times or market collapses occur in the stock market, one must remain stable in the market so that when the market corrects itself, one may fly with bright colors.

For example, if you’re building a nest egg by investing in stocks/mutual funds over the long term with the goal of cashing out to fulfill a lump sum demand – such as your daughter’s education overseas or a down payment on a new house – don’t wait until the last minute to sell your assets. The markets might be at all-time highs or have crashed because of a war, a big terrorist attack, or a string of monsoon failures, for example. Start withdrawing money in a methodical manner, several months ahead of time, and put your money in a safe bank account.

Diversify- Have an asset allocation plan, in other words. Your equity allocation would be determined by your risk profile and life cycle stage. Equity investment is not for those who are afraid of taking risks or who want a predictable income in retirement. If you just have Rs 100 to invest, put a portion of it into fixed income. The government has been generous in giving its depositors risk-free returns. Until a few weeks ago, post office deposits yielded 7.7%, while private sector banks offered just 6%. Government taxable bonds currently pay 7.75 percent over seven years, however, it’s unclear if this will continue. Such possibilities should be taken advantage of by investors.

Things happen to us and around us in life, but the only thing that matters is how you choose to react to them and what you create of them. It’s all about leaning in, accepting, and changing all of life’s challenges into something great.