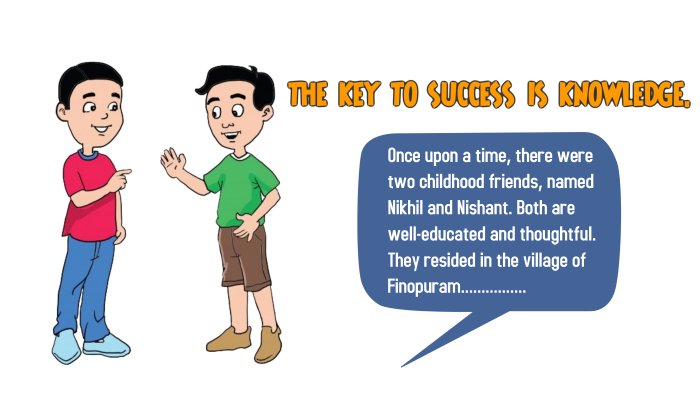 Once upon a time, there was a village – Finopuram. There were two childhood friends, named Jai and Veeru just like Sholay movie fame.

Not only Jai & Veeru were best friends, but they were also classmates throughout school and college. While, both were well-educated and thoughtful, time came for them to scout for the job. Like there friendship, it seemed their fate was also entwined; and they both got job in the same company.

Finally, the day came, when they both got their salaries. Money was the power they were tasting for the first time. And now they both decided to create more money from the money they earned, i.e., making money work hard for them like they worked hard in their job day in and day out.
Veeru was always gutsy, confident and outspoken chap like a “Yaaron Ka Yaar – Band of Brothers” belief. He was always like an alpha male with the urge to dominate the group. True to his instinct, as he was in FOMO (Fear Of Missing Out), he invested his salary in Crypto so that he get the BIG MONEY. Actually, this was where he had heard his friends investing. He was like always looking for some tips on stocks…!
Jai was a man with a backup plan always, always walking on his pace, just like a tortoise. Never in a rush. He started building his Emergency Fund, because he always feared what would happen if he loses his job. He always followed best companies and best fund managers.

Months went by, Veeru was aghast by the needless run of chasing the returns, and got nothing at hand. So, Veeru asked Jai one day, “How did you make profits when I’m in total loss?” Jai replied, “I invested in the market by learning about the company’s technical and fundamentals and then invested in the company.”

Veeru said, “But, where did you get all this information and how you were convinced to take a call?” “I consulted a trusted financial advisor and learned everything important about financial markets and know about trading strategies from them,” replied Jai.

Moral of the Story:
Investing in stock market only on the basis of tips: Everywhere People like VEERU may be found seeking stock suggestions on Facebook, Telegram channel, and from friends. Unfortunately, many people fall into traps and invest money without knowing it. What is the final outcome? They are robbed of everything!

Tags: THE KEY TO SUCCESS IS KNOWLEDGE